The trend of summer sea-ice retreat in the Arctic Ocean has increased every year since 1996. The average slow decrease of about 36 000 km2/year over the period 1979-1996 got bigger during the following decade (1997-2007) reaching 72 000 km2/year - it nearly doubled. With the 2012 record year, the summer sea-ice retreat trend estimation is more than 90 000 km2/year over the whole period of satellite measurements (1979-2012). Marie-Noelle Houssais, oceanographer at laboratory LOCEAN (University Pierre et Marie Curie, Paris, France) analyses for us every six months, the evolution of arctic sea-ice floes.

Contrary to expectations, the minimum annual extent of Arctic sea ice recorded on 10 September 2016 is associated with a record value which places it, with the minimum for 2007, in second place behind the minimum for 2012, which remains unequalled in 37 years of microwave satellite measurements. This annual minimum therefore identifies 2016 as a new record year for its low levels of ice cover. On 10 September last, the extent of the Arctic sea ice reached 4.14 million km2... 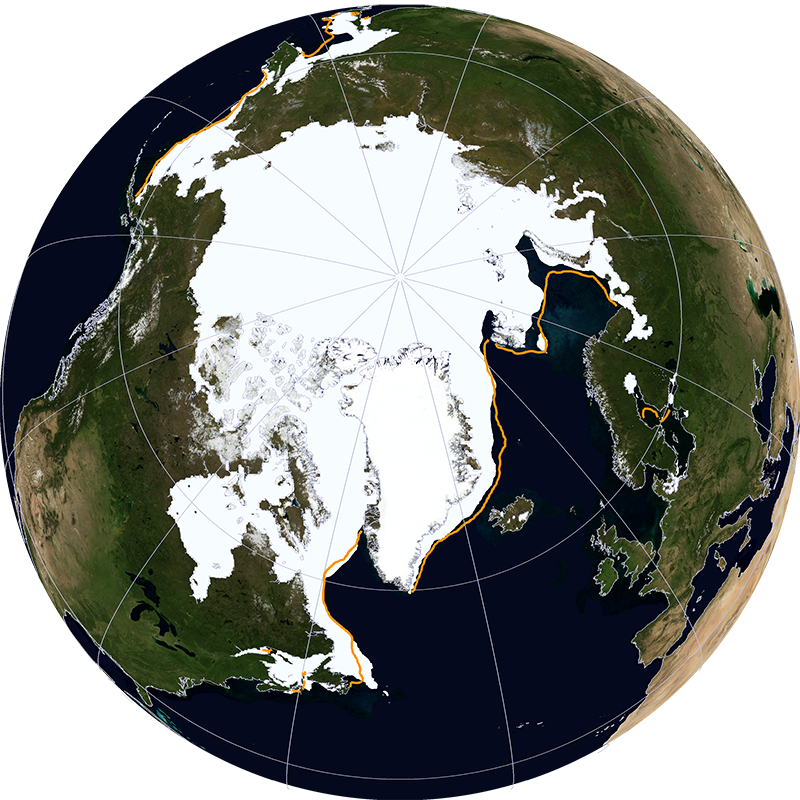 This year, Arctic sea ice reached its maximum extent at only the very start of spring, on 21 March 2014. Arctic sea ice extent for March 2014 averaged 14.8 million km2. This area is only 300,000 km2 greater than that of March 2006, the record year when ice extent shrank to its lowest winter maximum since the beginning of satellite observation. In fact, the winter of 2014 should be considered one of low sea ice cover, as it ranks fourth or fifth lowest in the satellite record. Ice extent in March was some 730,000 km2 below the benchmark average calculated for the period 1981-2010... 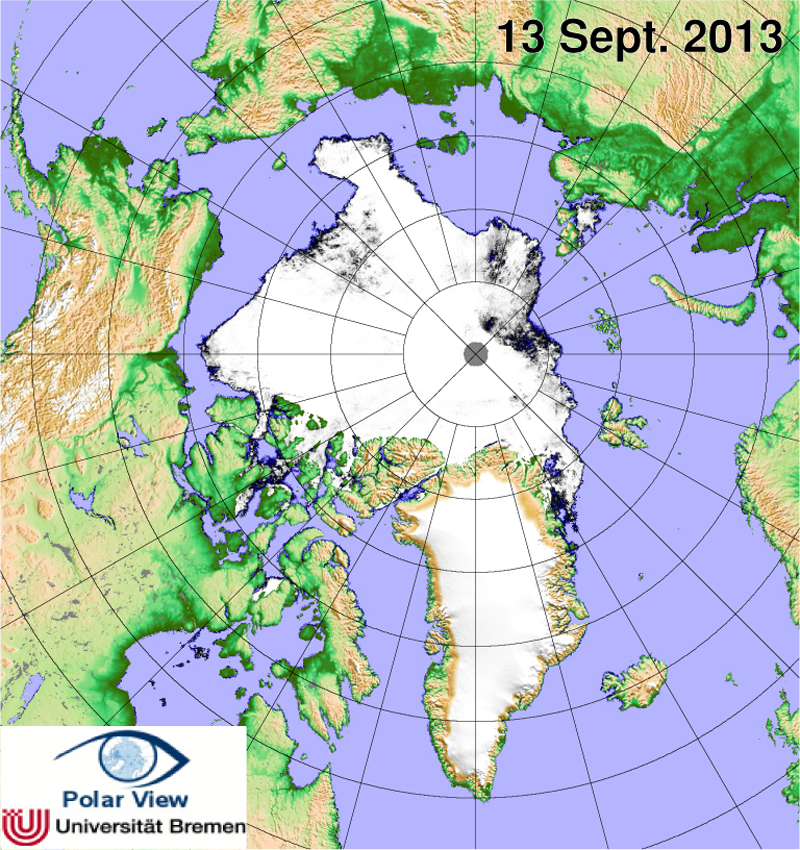 As of 13 September 2013, the annual minimum extent of arctic sea ice has not reached the record minimum values of 19 September 2012. This year, the arctic ice pack still covered, at its minimum point, 5.1 million km² whereas in 2012 it covered 3.4 million km² only. Since 2007 which initiated a series of years with particularly low ice extent, 2013 is, like 2009, the year with the greatest extent of ice pack in September. Therefore, although the average decreasing trend of September sea ice extent since 1979 continues to be confirmed, this trend has for ... 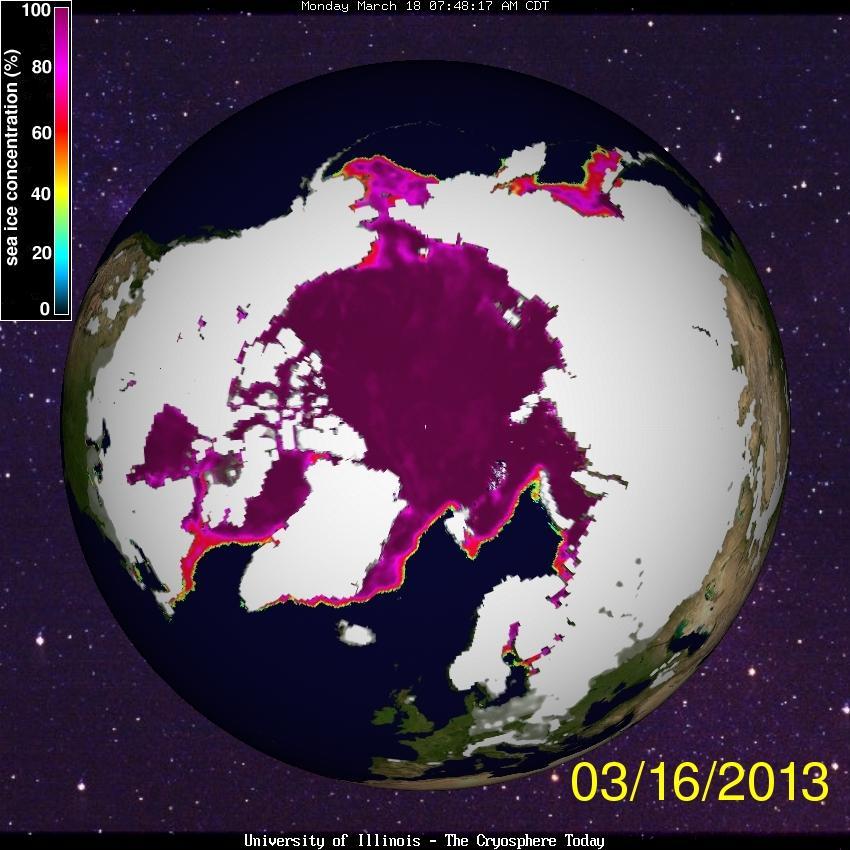 June 2013: the extent of Arctic sea ice reached its annual high on 15 March last and since then has begun a slow decline towards its end-of-summer low. Ever since it has been possible to assess them in a reliable and systematic manner from space, these two extremes of the annual cycle of the extent of the sea ice have shown a continued decline. However, the end-of-winter high shows a much slower declining trend than the end-of-summer low, as the recent change for the 2012-2013 period clearly shows, when placed in the historical context of the last decade... 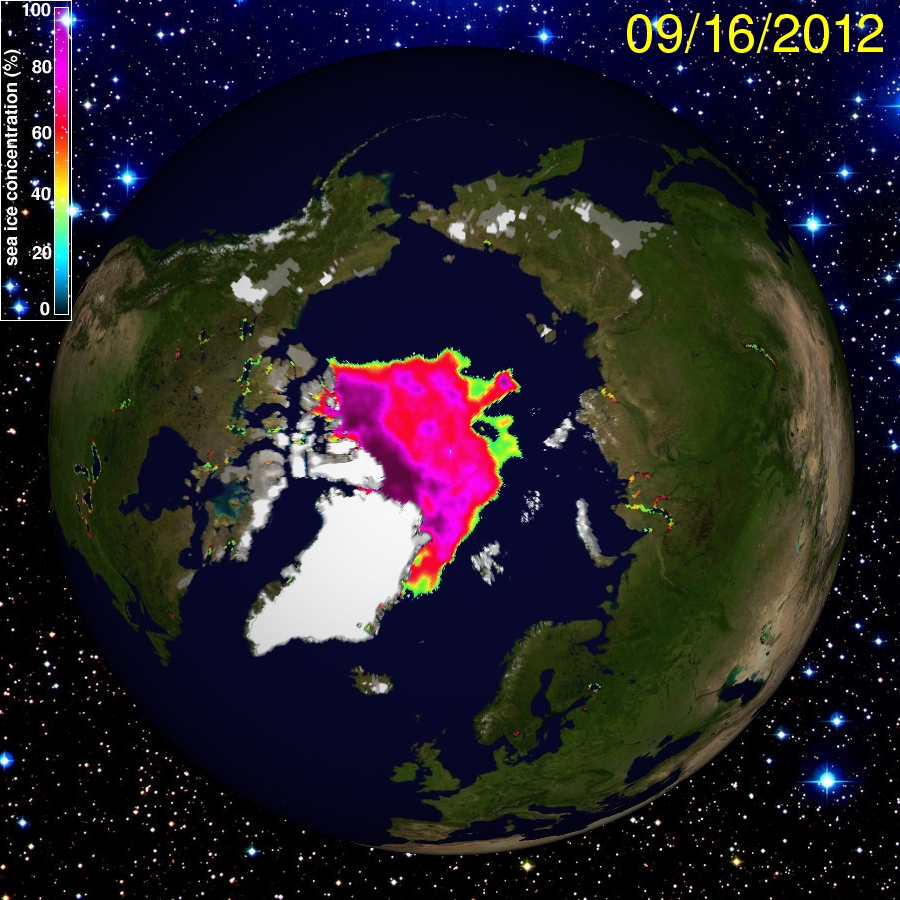 2012 has set a new record in terms of the extent of the arctic sea ice. On 16 September 2012, the extent of the ice cover reached a low point unmatched since the introduction of satellite monitoring in 1979. The frozen ocean surface area in the northern hemisphere reached the value of 3.41 million km², beating by some 750,000 km² –about 1.4 times the size... 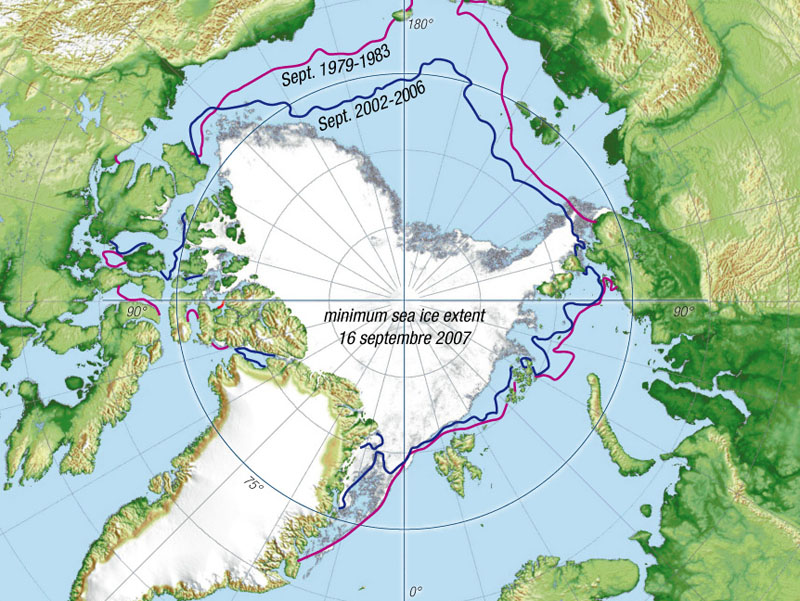