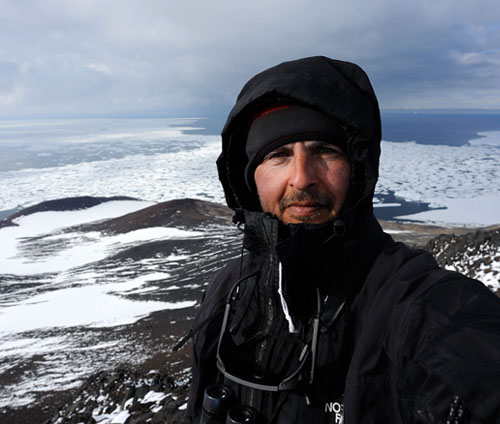 David Grémillet was educated as a marine biologist in France, Germany and Scotland and has been studying seabirds around the world for the past twenty years, with a major focus on Greenland and Svalbard and visits to the Falklands, Crozet and Antarctica (Ross Island). He is a senior CNRS scientist and leader of the Spatial Ecology Research Team at CEFE-CNRS Montpellier. Using miniaturised electronic recorders and thermodynamic models, he investigates the behavioural and physiological adaptations of seabirds to extreme climatic conditions, and their capacity to adjust to global change.

From age nine I decided that I would become an oceanographer; I was far from imagining that this passion would lead me to work both in the Arctic and the Antarctic. I initially came to Greenland to study how great cormorants, which originate from the tropics and are poorly insulated, survive the Arctic winter. Detailed knowledge of seabird ecophysiology subsequently led me to question how these fascinating creatures cope with ongoing and future climate change, and I have been investigating this issue in little auks from the Greenland Sea in collaboration with an international team.
Little auks are less well-known than their cousin the Atlantic puffin, yet they are the most numerous seabirds of the North Atlantic (estimated 80 million birds). They are essential components of regional food webs and powerful ecological indicators of Arctic environmental change because they feed on zooplankton (copepods) whose populations are highly sensitive to ocean warming. Studying little auks from different breeding colonies situated along an ocean temperature gradient in East Greenland and West Spitsbergen, we showed that birds in warmer areas were feeding on smaller copepods, and therefore had to double their foraging effort to maintain their energy balance, stay physically fit, survive and reproduce. Our study therefore demonstrates that some Arctic seabirds such as little auks have the capability to buffer the consequences of ongoing climate change. However, our investigations also strongly suggest that little auks feeding in warm North Atlantic waters have now reached their maximum working capabilities, and that Arctic climate change might eradicate 40% of all their breeding colonies by the end of the 21st century.
Our research work, which is supported by the French Polar Institute, demonstrate the importance of building networks of long-term studies across the Arctic, to better evaluate the impact of ongoing, rapid climate change on polar organisms and ecosystems.