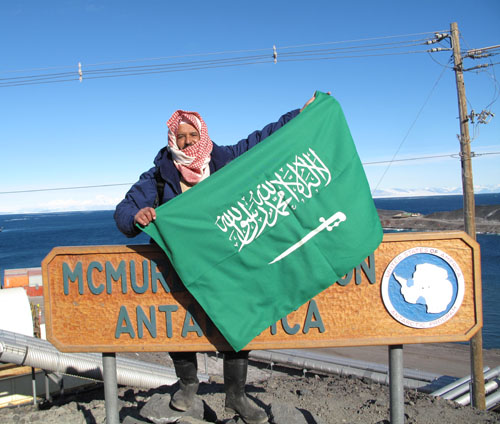 Antarctica means a lot to me, as a field geologist working on ancient glacial deposits in the geologic successions of the Arabian Peninsula. In the Peninsula, we have indications of at two Neoproterozoic glacial events or periods, two in the Paleozoic; Late Ordovician – Early Silurian glacial event and Late Carboniferous glacial event, and finally Pleistocene glacial event. I have discovered, studied, and published papers on the glacial rocks of the last event, Pleistocene glaciation. The rocks of this glaciation are exposed in the northwestern corner of Saudi Arabia and probably on the high mountains along the eastern coast of the Red Sea in Saudi Arabia and Yemen. I have enjoyed continuing field work in the Antarctic Peninsula and the Ross Sea where recent glacial depositional environments evident. Ice, in general has great influence on rocks and their depositional pattern. Glaciers and grounded icebergs may incise U-shape valleys and cause glacial pavements. Glaciers shape boulders; they polish and striate them. Ice carries rocks of different types, shapes, sizes, and origins from underlying ground and mountains. As the ice melts, rock loads are dumped unsorted in front of melting glaciers, as tillite. Rocks carried by floating ice and icebergs are slowly dropped, as the ice gradually melts. These coarse grained rocks mix with fine-grained marine deposits to form diamictites and dropstones. That is why I became interested in traveling to Antarctica to see these processes. When I heard about the American Geological Society expedition to the Antarctic Peninsula last year, my school, King Saud University, nominated me to join that expedition and the Ross Sea trip as well. During Ross Sea expedition I was fortunate to visit the Australian Macquarie base, American McMurdo base, and New Zealand Scott base. I am impressed by the scientific research programs in these stations. I found both trips very exciting and challenging from many aspects: geology, wildlife, oceanography, climate, glaciology, plants, sea weeds, lichen, and mosses. Antarctica is an excellent place for glaciologists to work. It is very clean and a lot of work needs to be done there. Though Arabia and Antarctica are far apart, the two plates show close tectonic, geologic, and volcanic history. Both plates were part of Gondwana and have similar glacial episodes. They have synchronous Cenozoic seismicity, rifting and volcanism. The Red Sea rift, separating Arabia from African, and Scotia Sea, separating South America from Antarctica, were formed since about 30-25 Ma. Seismicity and volcanism has been active in the two plates since that rifting and are still active. Based on geologic field observations and preliminary investigations in Arabia and Antarctica, it is probable that the seismicity and volcanism in both plates appear to have been associated with the rifting process and remarkably persistent in the beginning of Tertiary to the Present. Both plates have a similar general pattern and timing of magmatic upwelling for the sea-floor spreading and volcanism.